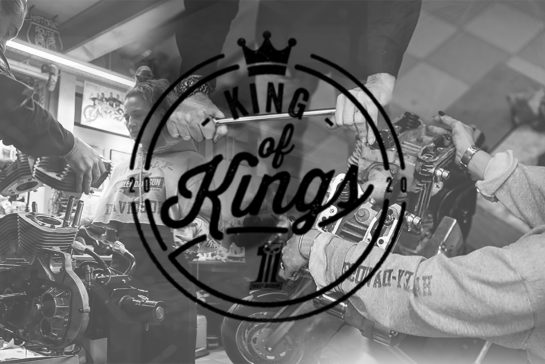 a time to make friends!

Our trip to the Motor Bike Expo in Verona could have received many headlines with positive titles. But the title “Visiting friends” describes it most accurately. All fellow travellers were the same opinion that they have rarely experienced such a beautiful and pleasant time at the fair.

The destination of our trip was on the one hand the presentation of the new Custom Chrome Europe Bike which we built for the 50th anniversary of the company. On the other hand the invitation of Andreas and Kim to participate as judges in the jury of the bike show “King of Verona”. 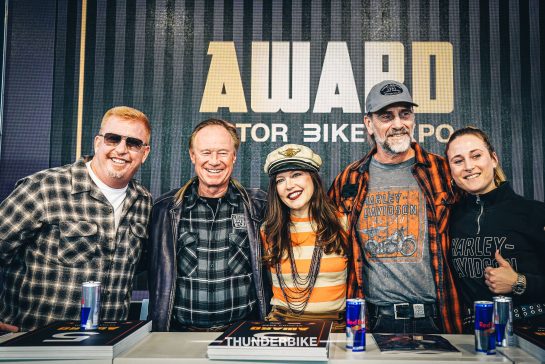 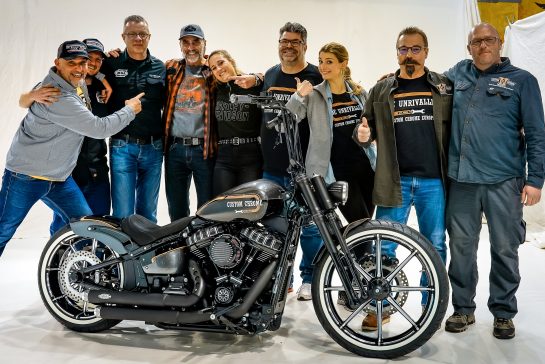 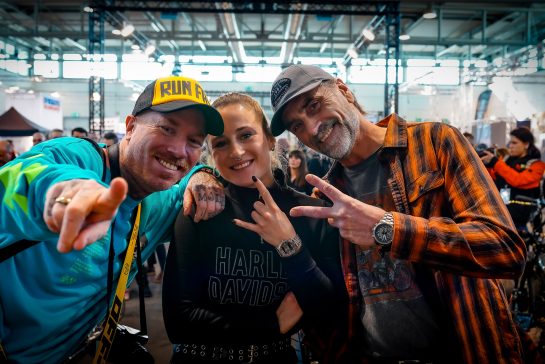 But let’s start at the beginning.

On Wednesday morning, January 15th we started in Hamminkeln to make our arrival one day before the start of the fair more relaxed. After two security checks which we had to go through, only because of bad signs on the airport roads, we reached Verona after a short flight. There we rented a bus and after about 2 hours drive we reached our hotel near the main station. Already curious about the city and its inhabitants, we went straight to the historical city centre. The city gate of Verona welcomed us generously to show us the way to the square in front of the Colluseum. More and more we became aware that Verona knows how to charm us. The marble paved streets and historic buildings, where small boutiques and restaurants invite us to relax, contributed to the atmosphere. 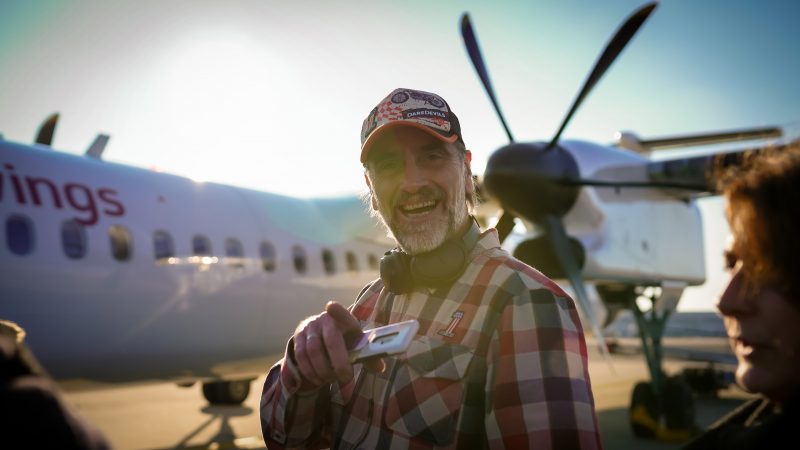 After a little research on the internet we decided to go to the Trattoria alla Colonna. We liked the ambience but the food was a little disappointing. Unfortunately, the schnitzel with the appropriate name Coteletti, which is praised as a local delicacy, was not our favourite. Salami with cheese on a flattened schnitzel was not tasty and also not Italian.  Without further delay we decided to look for a italian dessert in the city centre to make souls happy. What could be better than italian gelato! Salt caramel, tiramisu and dark, almost black chocolate of the finest quality sweetened our way home to the hotel.

Thursday, and with it our first day at the fair, we started after a refreshing breakfast with a walk of about 3 km to the fairground. In beautiful weather with the winter sun still low in the sky, we discovered another side of the city, because the way to the fairground led us past decaying factory buildings and noisy highways. But we used this to pose and photograph each other in some extraordinary ways. Strictly Thunderbike style – you always have to make the best of everything! 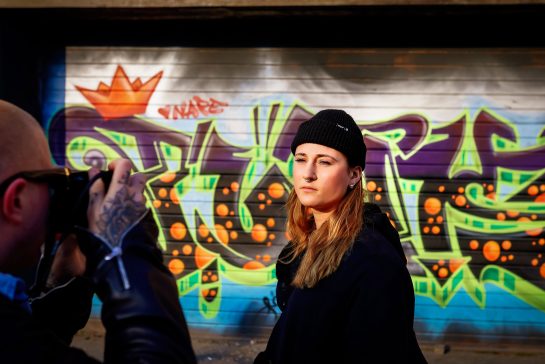 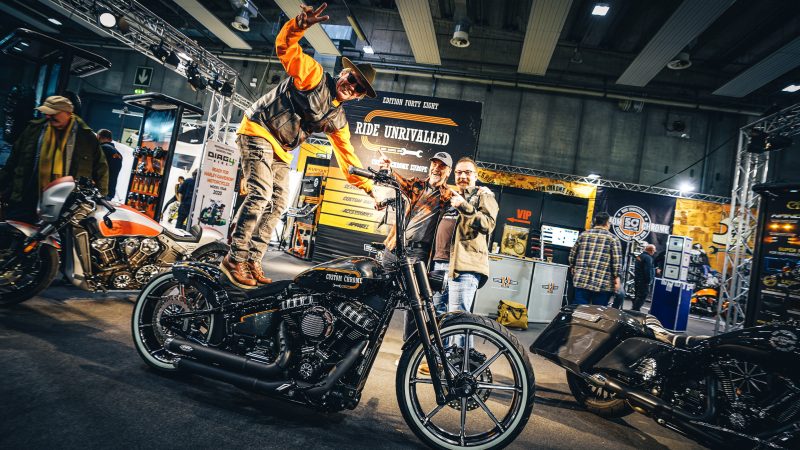 The exhibition halls welcomed us relatively empty and tidy. We immediately liked the wide walkways between the booths and the good supply of fresh air. Our first target was the Custom Chrome booth to discuss all important points for the upcoming presentation. The 50th Anniversary Bike was ready, but still covered to keep the tension up. All participants had taken great care not to publish any pictures of the bike in advance. At 12:00 o’clock the time had come, under the eyes of the press and many visitors, photographer Horst Rössler guided through the presentation. All the big names of the scene, such as Cory Ness, son of customizer legend Arlen Ness, Custom Design Parts boss Kirk Taylor, Wolfgang of BSL Parts and the Custom Chrome team around marketing boss Axel Scherer were gathered at the booth. With applause Kim and model Georgia pulled down the velvet and unveiled the long-awaited bike. The opinion and comments were directly unanimous – “What a great bike! A delicious Sacher cake was cut for the 50th anniversary and a few bottles of good prosecco were beheaded to round off the celebration.

Released from the tension of the bike presentation, the aim was to conquer the other halls. Bike exhibitors from all over the world showed their thoughts on how customizing can look like. Above all, oldschool bikes and the newly upcoming trend of clubstyle Harleys dominated the show. But meanwhile the aftermarket offers so much material, that pure bold-on Bikes could outdo or even outshine some handmade bikes. We especially liked the colorful digger of Arnaud Mary / Hillside as well as the booth of Lorenzo Solighetto/Boccin Customs who was also a participant of the bike show with his yellow chopper. Unfortunatelly Lorenzo couldn’t finish the chopper in time which cost him some points in the end. In addition to numerous conversions, clothing manufacturers were present for everything to do with motorcycles and the associated lifestyle. Typical Italian, fashion was at least as important as the performance of the bikes, in case of doubt “more appearance than substance” applies. From the vintage flyer bomber jacket to the white leather suit over all kinds of headgear there was something for every taste and purse. 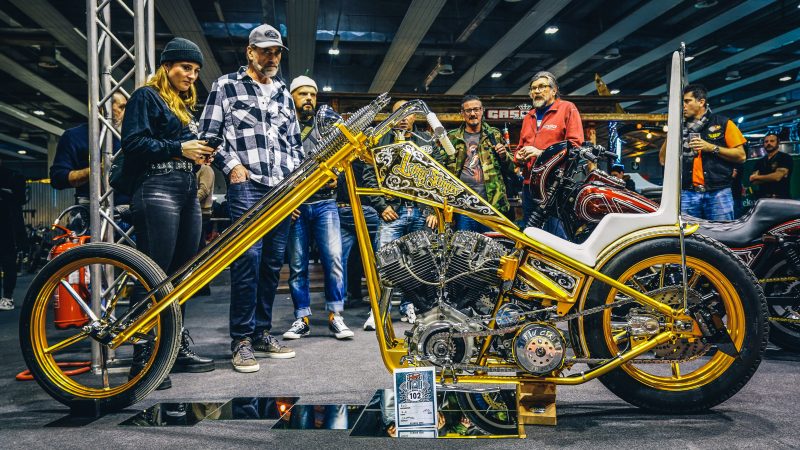 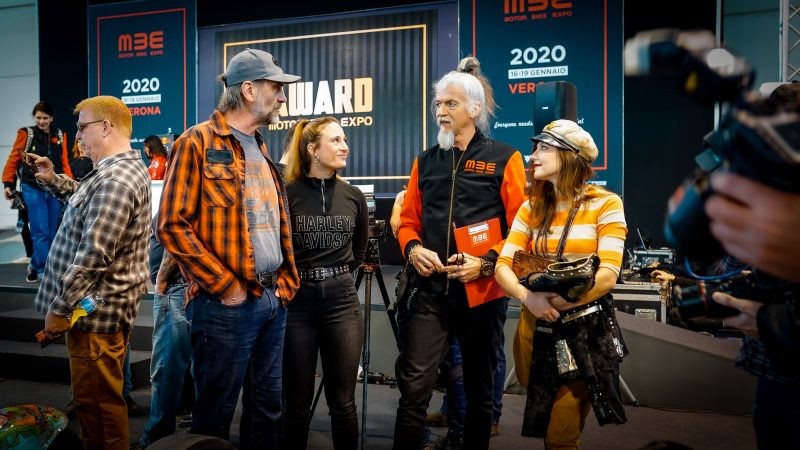 At the end of the day there was a meet and greet behind the scenes. The judges of the bike jury came together for pre-judging and there was a relaxed exchange among old friends. This year the jury was again top-class, besides Baggers Nation Boss Paul Yaffe, Sturgis Buffalo organizer Rod Woodruff and Bord Track pilot Brittany Olsen also the Thunderbikers Andreas and Kim Bergerforth. Concentration had to be increased once again briefly and each of the judges had to ask themselves a few questions about customizing in an interview in front of running cameras. Our father-daughter duo tackled the situation with flying colours and was able to draw relaxed from 35 years of experience.

We celebrated the successful presentation of the CCE bike with the guys from Custom Chrome until late at night. Their correspondent for the italian market turned out to be an excellent city guide and restaurant expert, so we stopped at the Hosteria Il Punto Rosa. There we enjoyed the culinary delights, from Frutti de Mare to the finest beef fillet, there was something for everyone on the plates. Red and white wine according to taste rounded off the event and made the conversations deeper and the laughter louder! A great evening all around! 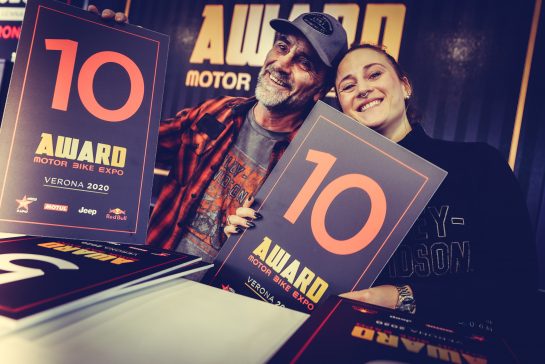 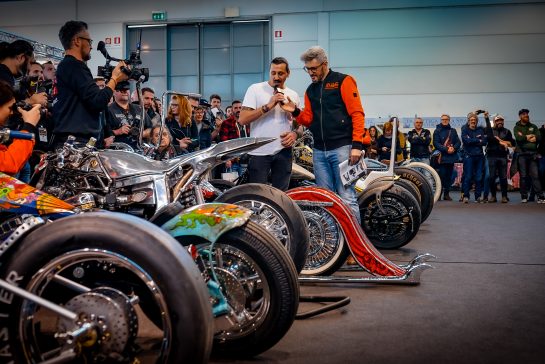 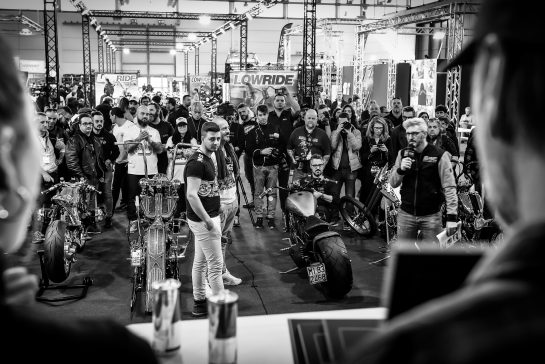 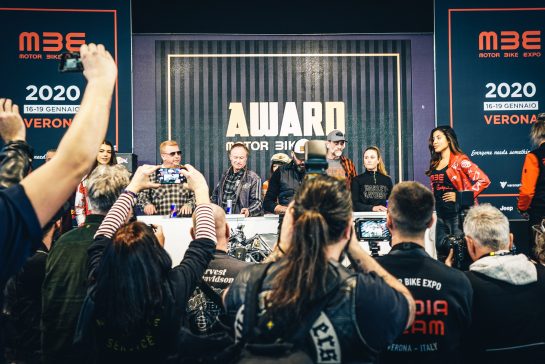 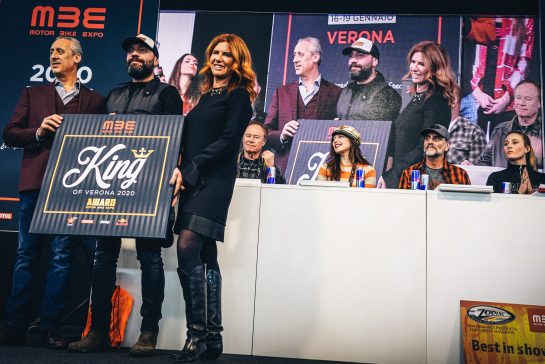 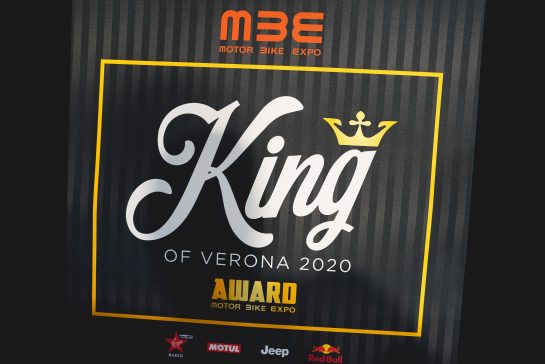 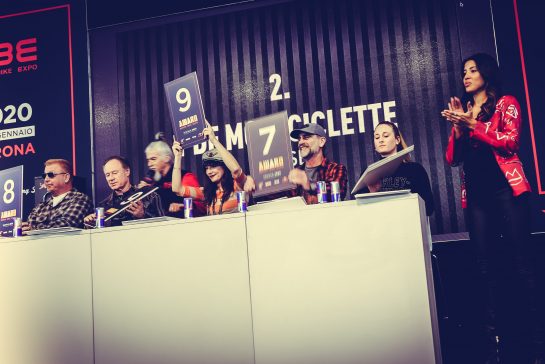 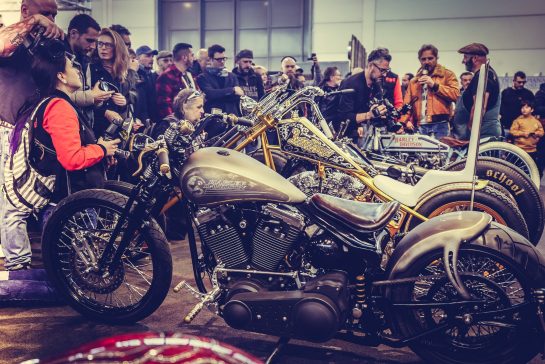 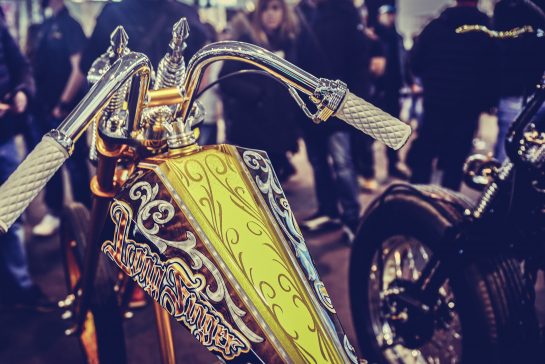 Friday began as before with a good breakfast and another walk to the exhibition halls. For the day the election of the King of Verona took place. The prize is awarded as Best of Show and already draws a clear line to the coming customizing trends of the upcoming season. The renowned finalist field consisted mainly of italian conversion specialists and mechanics. Pepe Lorenzo stood out from the crowd as a person and his red Chicano Chopper as an exotic. All participants were first introduced personally with their bikes before the judges gave their ratings. There were 5 up to a maximum of 10 points to be achieved, whereby the 10 could only be awarded once. Andreas’ choice of 10 was the naked silver BMW speedster by Radikal Chopper from Italy. The craftsmanship was convincing and the harmonious design spoke a clear language, “We have a winner! Andrea Radaelli wins the crown and is named “King of Verona””. With applause he is awarded and put on the coveted silver bracelet. After countless photos were taken with all the jurors and organizers involved, the official part was over and we mingled again in the hustle and bustle.

In the exhibition halls we met many old friends and made new friends. The parties at the Punta Bagna and Rokker Clothing booths were just a few of the places where people got together for a beer and exchanged news or celebrated the old good times.

Custom Chrome’s after-party was awesome. We made ourselves clear to each other during the party, nobody at home will understand that.

Rarely have we celebrated so exuberantly and free from all pressures. It was a relaxed, sometimes wild and always fun together, nobody was hit on, nobody was judged. The live music trio, consisting of a guitarist and two DJs, kept us on fire until slightly after midnight, hammering out one anthem after another. Laughing and dancing we welcomed everything!

Not tired at all, we left the fair and headed towards Mr.Martini, that’s the name of the local Triumph dealer. At fair time he empties his workshop and sales rooms to turn his shop into a disco. In the courtyard there was a beer stand and food trucks ready to serve us. So we ended the night and strolled together back to the hotel. 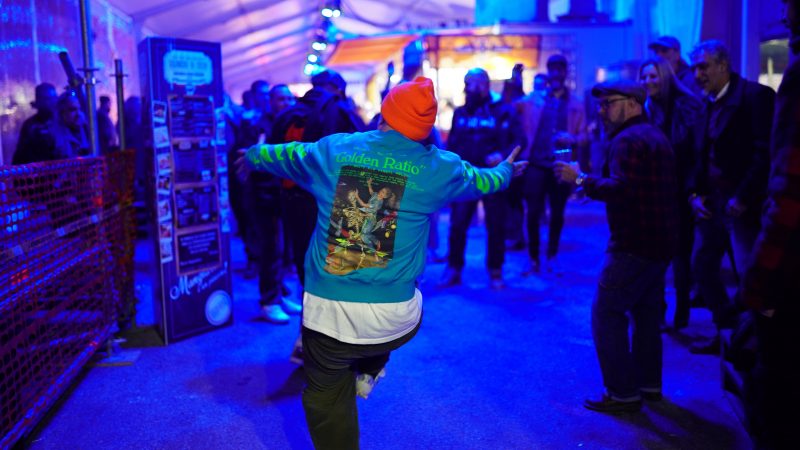 At the end, as is well known, there is always a conclusion and this is short and to the point,… Guest of friends.

I guess that’s all there is to write. Thanks Motor Bike Expo, Arrivederci Verona.