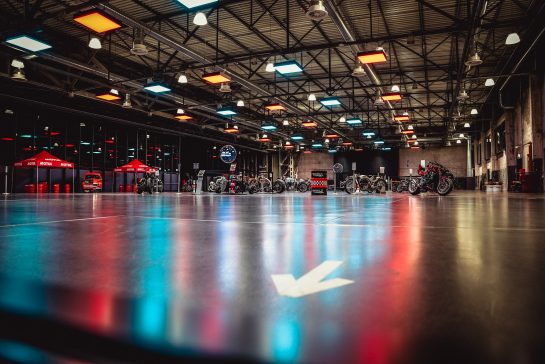 Thunderbike on the Run

13 o’clock in Hamminkeln, about 20 Thunderbikers meet for a common ride with their bikes at the headquarters. The weather is not really inviting and still we all start motivated and with the tip box under our arms. The destination is our friend KÃ¤the, where we want to make a party with our collected money from the tip box.

Actually we all stayed dry and the track was super nice: 100 kilometers of winding asphalt and around us only field, forest and meadow!

Everything went according to plan, except that we lost two colleagues temporaryÂ found them later again) and drove unknowingly through a fully closed road.

And yes, admittedly, the two older bikes of Andreas and Gernold did not always start immediately after the short breaks, but with the assembled experts even the most stubborn donkey gives way at some point.

After we arrived at Käthe and her family and were warmly welcomed, we got cool drinks, chops & Co.

Does anyone of you know pine-schnapps? Spiritus, vodka and yes: pine syrup! The evening went on… Of course we won’t tell you all the details, but one thing we can tell you: With the crazy guys from Thunderbike it won’t be boring”.

The night ended properly with live music and candles. Thanks Lucas, you are the hammer! Here again a big thank you to Käthe, Michael and everyone who prepared so much for this evening!

Thunderbike rolls to the lake!

Last Friday six guys of the Thunderbike Crew organized themselves to make a wet and cool ride out.

With almost 30 Thunderbike team members we made our way to Willingen on Saturday. You can see the complete story in [...]

This Friday we were at Road Fever! With concentrated Thunderbike Power we went to the airport in Düsseldorf, because: [...]

Much on the way, but not all seen! In this Ride Out we explored the Bikes & Boards Event in Zaandvoort. See the complete [...]

Living Life to the Fullest

Get on the bike, go and feel the wind through your face - these are the priceless moments. Of course, if you can [...]

When you think about real biker music, the first ZZ top comes to your mind. We were allowed to meet the legend!

Life is a Ride

After several attempts, we finally made it. On Saturday the 21.04.18 we have drummed around the 30 Thunderbiker [...]